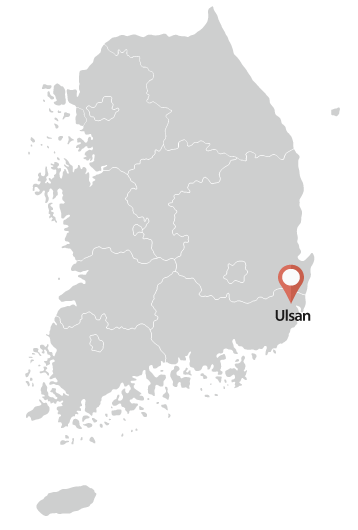 Over the past 50 years, Ulsan has formed Korea's top industrial cluster in the three major industries: automobiles, shipbuilding, and petrochemicals. At the national level, Ulsan still ranks first in the petrochemical industry and second in the automobile industry. As Korea’s industrial capital, Ulsan accounts for 11.6% of the nation's industrial output, making it a strong location for foreign investment, exporting $ 70.3 billion. In terms of foreign direct investment, Ulsan’s annual foreign direct investment arrival was USD 500 million for the last three years in a row. The FDI amount was over USD 800 million in 2019 alone. In line with the “Renewable Energy 3020 Project” proposed by the Korean government, Ulsan is developing a large floating offshore wind farm complex to comply with the national energy policy, opening up a new chapter in the shipbuilding industry. To share the future of the new economy, Ulsan’s vision is to become the world's top hydrogen city, aiming to manufacture 500,000 hydrogen cars by 2030.

Ulsan is planning to become a global hydrogen city by the year 2030. Key project related to this goal includes the establishment of a national hydrogen industry promotion agency, manufacturing 500,000 hydrogen vehicles, building a hydrogen industrial complex, creating 200 companies specialized in hydrogen, and developing a 63 km city pipeline. Ulsan’s hydrogen capacity by 2030 is estimated at over 500,000 hydrogen cars, 60 refueling stations and a 200 km pipeline network.

Ulsan Port aims to become the central location for norther economic cooperation and a global energy hub. To this end, key projects include building an oil and LNG storage facility at the Ulsan Port site spanning 648 m2; increasing trade of oil, gas and petrochemical products, and opening an energy trade market in Northeast Asia. The ripple effects from such projects are expected to be the expansion of the energy supply base from oil to both oil and LNG; attraction of large-scale private companies stemming from the corporate demand for LNG power plants; and stable value-added products such as LNG storage.