Korea’s beauty industry has become one of the country’s new growth engines. Even the current U.S.-China trade dispute cannot undermine the industry’s growth potential, which has only demonstrated an increase in the amount of exports and production for the last 6 years since 2012. According to the Korea Health Industry Development Institute, the annual average growth rate of the Korean beauty industry is at 10.8 percent. The size of the global cosmetics market amounted to USD 397.1 billion in 2017, and Korea took up about 2 percent of it, ranking 11th in the global market share. Korea’s cosmetics exports in 2018 is estimated at around USD 5.95 billion, up 22 percent from the previous year. The steep increase is due to Korea’s efforts to diversify its cosmetics export markets, stretching from China to the U.S., EU, and Central and South America. 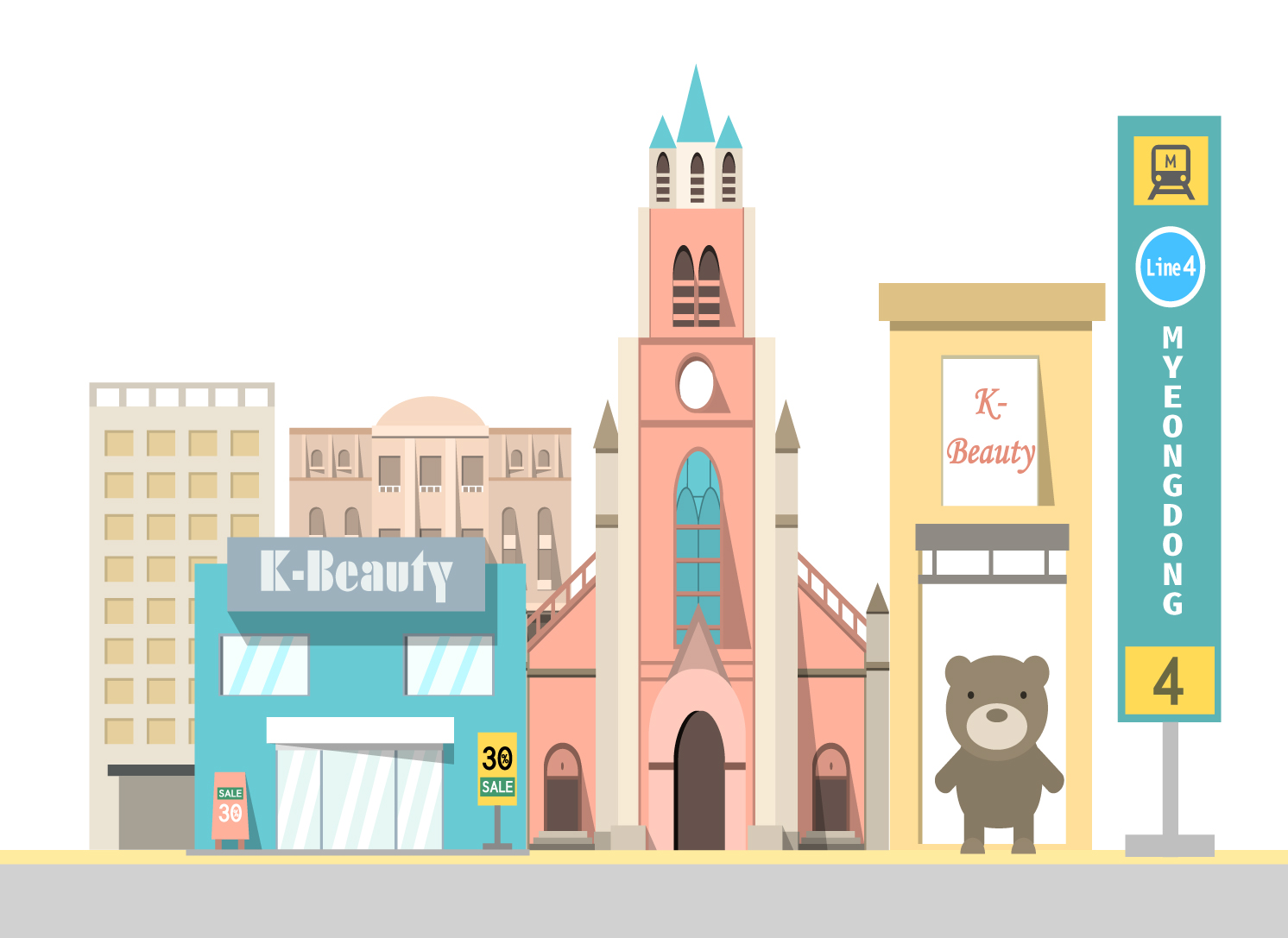 Korea’s cosmetics clusters are concentrated in the Greater Seoul Metropolitan Area, but one can say that Myeongdong sums it all up. Myeongdong is a highly populated district in Seoul overflowing with cosmetics shops. Dubbed as the shopping mecca, Myeongdong is the most visited site by tourists. According to Seoul City’s survey data, 88 percent of 1,500 foreign tourists said that they had visited Myeongdong. The most popular items for purchase at Myeongdong were, in fact, cosmetics. Foreigners visiting Seoul from January to October in 2018 totaled 9.99 million, and the number was expected to reach over 12 million by the end of the year.

At the heart of Korea’s beauty industry lies the K-beauty craze, powered by the high tide of the Korean Wave. The K-wave refers to the growing popularity of Korean culture such as K-pop, K-drama and K-food. While K-beauty is also a part of it, the immense popularity of K-pop has boosted the growth of Korea’s beauty industry. For example, the global sensation of the K-pop boy band BTS has transcended the boundaries of culture and has had a significant impact on Korea’s economy. As a matter of fact, the annual economic value generated by BTS is estimated at around KRW 4 trillion (USD 3.54 billion), according to Hyundai Research Institute. As the band’s popularity index increased, Korea’s cosmetics exports also increased. Furthermore, more than 800,000 foreigners have visited Korea annually to see the band’s performances since 2013, and 7.6 percent of 10.4 million visits to the country in 2017 was related to BTS in one way or another. The Seoul City government released a serious of videos promoting tourism in October last year, featuring BTS members introducing various elements of Seoul, making the city a more attractive place to visit, at least to their millions of fans. The increasing volume of tourists visiting Seoul, and the Myeongdong area being the most popular tourist attraction for tourists suggests a solid growth prospect of Korea’s cosmetics industry due to the enormous boost in cosmetics sales.

The ongoing K-wave sweeping the globe remains as the strong backbone of the K-beauty industry, and has contributed to shaping today’s K-beauty products and services. In Myeongdong, it’s hard to miss the streets covered with posters of K-pop artists and famous Korean celebrities advertising cosmetic products. However, research data indicates that the K-wave is only a contributing factor to Korea’s increasing cosmetics sales and not the determinant factor. According to the Seoul City government’s survey data, buyers from China appreciate the design, quality and reliability more so than the price competitiveness of products. More respondents chose design, quality, as well as corporate trust and brand as the key reasons behind Korea’s cosmetics competitiveness, compared to just 10 percent choosing price competitiveness. In short, the K-wave motivates people to look for K-beauty and its products, but what drives the continuous growth of the market is the overall competitiveness of the products, not the advertisements by pop stars.

Chinese buyers and tourist groups visiting Seoul, and in particular, Myeongdong, are largely responsible for the sharp increase in both the production and sales of Korean cosmetics. When China put travel restrictions on visits to Korea in 2017 in response to a diplomatic conflict over a U.S. anti-ballistic missile system, duty free stores and street shops in Myeongdong saw their sales revenues decline. In addition, the shift in consumers’ shopping patterns from street shopping to online shopping contributed to the declining number of customers making physical visits to department stores and single brand retail shops. While the annual average rate of growth of single brand shops slowly declined, shops selling products from multiple brands, such as Health and Beauty (H&B) stores, have seen double the growth. Now, there are over 1,350 H&B stores throughout Korea, which has grown over 20 percent annually for the past three years.

In order to attract consumers, single brand retail stores are transforming themselves, adding features like studios and virtual reality (VR) make-up demonstrations to enhance user experience. Businesses are diversifying their channels for sales and promotion, adapting to the lifestyle of social media users. Duty free stores in Korea started inviting Chinese social media celebrities, also known as Wanghong, and started implementing new marketing strategies like influencer marketing. For example, a major duty free brand invited one hundred Chinese Wanghong with a total of over 200 million followers, and ran a 20-hour live broadcast to promote Korean cosmetics. Amid the improving relationship between Korea and China, foreign visitors to Korean duty free shops reached over 1.5 million in the last four months, fueling the market once again with a new annual sales record surpassing the previous year’s figure. The prospect of Korea’s cosmetics industry remains promising, as the industry continues to strive forward to meet the needs of the market. Perhaps Amazon’s added feature of the “Korean Beauty” section on its website is a sign that well-represents K-beauty entering the world’s mainstream market.