Of all the streets in Seoul, there is only one street named after the capital of a foreign country.

Teheran-ro, Korea’s leading commercial district and a center of startups, was named when the former mayor of Tehran, the capital of Iran, visited Seoul in 1977 and established a sister relationship.

Despite the street’s short length spanning only about 4 km, it is the showcase of Korea’s economic growth. The development of Teheran-ro was driven by the opening of Subway Line 2 in 1984 passing through the street. In every area surrounding a subway station, commercial buildings went up, and clothing, chemicals and other manufacturing companies which played a vital role in Korea’s exports at the time flocked in. Also, the Korea World Trade Center (KWTC) was built in Samseong-dong in 1988. A 55-story Trade Tower, annexed to the KWTC, was the second-tallest building in Korea when its construction was completed.

In the 1990s, as the government pushed for the development of this area as a center of economy and finance, large companies in the steel and finance sectors herded. In the late 1990s, software and ICT venture companies such as HANCOM and AhnLab moved into the area for operation. NAVER, Daum Kakao, and NCsoft, which have grown into Korea’s flagship companies also originated from here. With 1,500 ventures moving into Teheran-ro, venture capital also started take root here, and it was around then that the street was dubbed as “Teheran Valley,” implying that it served as the Silicon Valley of Korea.

Recently, companies which provide shared workspace and incubating functions have been emerging on Teheran-ro, drawing in startups.

There are currently 34 shared workspaces (including incubators and other business incubation facilities) in the area. Eight WeWork branches can be found on Teheran-ro alone. The world’s third and Asia’s first Google Campus is also located on the street. TIPS Town, an office space for accelerators, venture capital, startup teams, and supporting organizations participating in the Tech Incubator Program for Startup (TIPS) run by the Ministry of SMEs and Startups is also operating here. As of late 2018, the aggregate amount attracted by startup teams participating in TIPS from foreign venture capital firms reached USD 86.57 million. Lunit Inc., an AI-based bio startup which attracted investment from domestic and international venture capital firms, also originated from TIPS. D’CAMP, operated by Banks Foundation for Youth Entrepreneurs which is established by 18 banks, is also based on Teheran-ro. VivaRepublica, a fintech company which attracted investment from Sequoia Capital, the Government of Singapore Investment Corporation and Kleiner Perkins came from D’CAMP. As such, shared offices and startups have formed a new venture valley, ushering in a new heyday for Teheran-ro as an epicenter of venture investment.

Teheran-ro crosses through Gangnam Business District, one of Seoul’s three major business districts. Accessing the Central Business District (CBD) located north of the Han River and Pangyo Techno-Valley is also easy through the New Bundang Line and Bundang Line near Gangnam station on Subway Line 2. Getting to Yeouido Business District (YBD) is also undemanding thanks to Subway Line 9 located nearby. Furthermore, the neighborhood surrounding Teheran-ro is known for its favorable living environment, equipped with an outstanding school district as well as advanced medical and cultural infrastructure.

Once the Seoul International District, being pushed by the Seoul Metropolitan Government, is established and Hyundai Motor’s Global Business Center is built in Samseong-dong, the part of Teheran-ro neighboring Samseong-dong is expected to take another leap forward, transforming into a district where living, business, commerce, transportation, shopping and leisure facilities are all available. 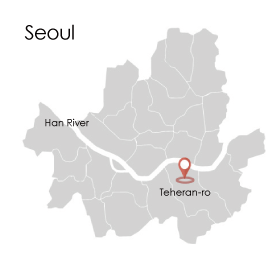