In Korea, there is a city wishing to become the world’s leading energy city.

It is Energy Valley, which has been growing into the mecca of the new energy industry in Korea.

Energy Valley is Korea’s first energy industrial complex, established by the state-run Korea Electric Power Corporation (KEPCO) in cooperation with South Jeolla Province (Jeonnam), Gwangju Metropolitan City, and others. By considering the relocation of KEPCO down to Gwangju & Jeonnam Collective Innovation City in 2014 as an opportunity, a project to build Energy Valley was initiated in order to secure the upper hand in the global energy market. It aims to attract 500 companies in the new energy industry by 2020 and create 30,000 jobs.

Energy Valley drew much attention since signing an investment agreement with Bosung Powertec, the Valley’s first company, in March 2015, followed by 77 other companies in the first year. The number of companies Energy Valley has attracted are as follows: 100 in 2016, 103 in 2017, and 80 in 2018, already surpassing the overall target of attracting 300 companies.

As of December 2018, Energy Valley attracted a total of 360 companies in the energy field, with the cumulative agreed investment amount of KRW 1.5026 trillion. 206 companies (or 57 percent of the total) actually executed investment in such ways as buying sites, and building or operating a factory. The rest, 154 companies, are in the preparation phase. The list of large corporations making the decision to move in include LSIS, Hanwha Energy, Hyosung Heavy Industries, Doosan Heavy Industries & Construction, among others. Foreign companies such as GE of the U.S., Alps Company of Japan, BMF of Switzerland, and ABB of Germany are also scheduled to move in.

Nuri Telecom built a factory in Energy Valley in late 2016, providing AMI solutions to 46 power companies in countries around the world including Sweden, Norway, Ghana, and Vietnam. Sebang Battery is also set to invest KRW 100 billion, the largest scale in Energy Valley to date, which will produce ESS and secondary batteries. As the scale of investment by Sebang Battery is large enough to induce partner companies to follow in its footsteps, the industrial ecosystem of ESS-a core element of smart grid-is expected to be built in the early stages.

Gwangju Metropolitan City and Naju City has the largest number of smart grid companies in Korea, except for Seoul and capital areas. Gwangju & Jeonnam Collective Innovation City located at the center of Energy Valley is a new city developed jointly by Gwangju Metropolitan City and South Jeolla Province in step with the government’s policy to decentralize public organizations. Currently, four public organizations in the energy sector, including KEPCO, KEPCO KPS, KEPCO KDN, and Korea Power Exchange (KPX) have completed relocation. In total, 16 public organizations including those in ICT, culture & the arts, agriculture and bio have completed relocation, resulting in a population of over 13,700 moving to Gwangju & Jeonnam Collective Innovation City. Seoul is within a 1.5 hours’ reach, thanks to two KTX stations located within 10 to 20 minutes from Gwangju & Jeonnam Collective Innovation City. Also, it is close to Gwangju Airport, Gwangju Highway, and Honam Highway, boasting easy transportation connectivity with other regions.

South Jeolla Province, where these cities belong, is home to Korea’s largest chemical industrial complex and steel mills, and thus, has the reputation as Korea’s industrial resources provider. Jeonnam is ranked 1st in terms of renewable energy production and 3rd in electricity generation. Jeonnam provides industrial sites at 1/5 lower prices compared to the national average, alleviating the early-stage investment burden of companies.

KEPCO is most aggressive in developing Energy Valley into a hub of global energy. Currently, KEPCO is pushing for the establishment of Smart Energy City in Gwangju & Jeonnam Collective Innovation City to which Energy Valley belongs. Smart Energy City is an eco-friendly future city that enhances energy efficiency and functions of city management by converging the information gathered from smart grid infrastructure, i.e. AMI and EVC with the information generated from a city. Currently, a project is underway in Naju City to establish smart city infrastructure including AMI and demonstrate an integrated operation platform.

In January this year, it has been confirmed that Kepco Tech, a university specialized in energy, will be built in Gwangju & Jeonnam Collective Innovation City in 2022. In addition, the Korea Electrotechnology Research Institute, Electrical Equipment Test & Research Institute (tentatively), and Energy New Technology Research Institute (tentatively) are planning to move into Energy Valley. Furthermore, the Ministry of Land, Infrastructure and Transport is to designate Gwangju & Jeonnam Collective Innovation City including Energy Valley as a growth center, intensively fostering relevant industries until 2022. As part of such efforts, Energy Science Park, Next-Generation Secondary Battery Certification Center, and ESS Recycling Technology Development Center will also be established. On this account, Energy Valley is expected to advance into an industry-academia-research cluster in the new energy industry, which is believed to be a driving force in the era of the Fourth Industrial Revolution. 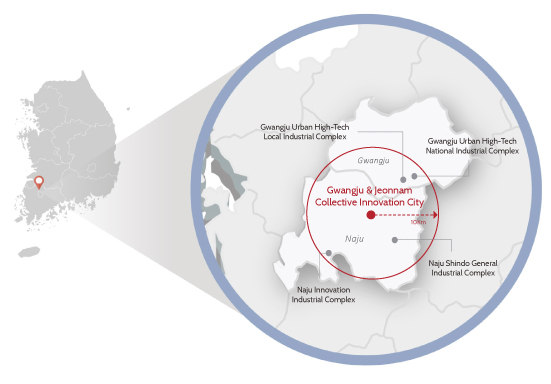