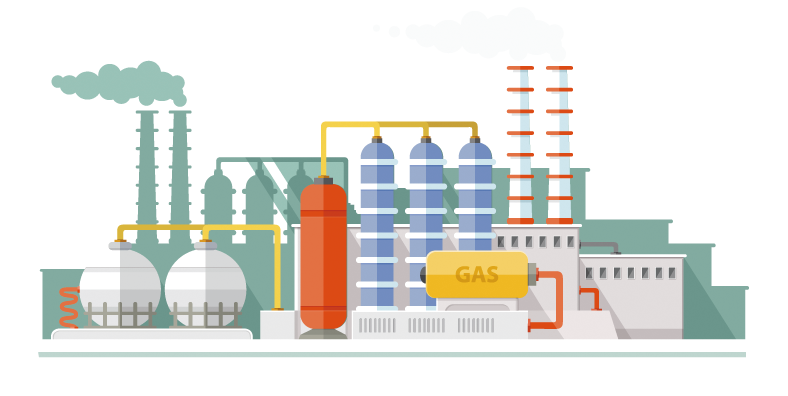 At the center of the “Miracle of the Han River” that caught the world by surprise through rapid economic growth lies the petrochemical industry. The foundation of Korea’s petrochemical industry was laid down in line with the growth of forward-looking industries utilizing petrochemical products as raw materials including textiles, shoes, and plastics in the 1960s. Since then, it has continued to grow on the back of the growth of related industries including automobiles, electronics and shipbuilding.

In fostering the petrochemical industry, the Korean government created petrochemical industrial complexes in Ulsan, Yeosu and Daesan, which are still playing the roles as the hubs of Korea’s petrochemical production. The companies involved in oil refinery, Naphta Cracking Center (NCC) and derivatives factories are pushing for the vertical integration of production, while jointly using support facilities such as ports, industrial water and utilities. This month, KOTRA Express will focus on Yeosu, the most productive region in ethylene production capacity among Korea’s three largest petrochemical complexes.

Yeosu accounts for half of Korea’s petrochemicals

It’s not an exaggeration to say that Yeosu accounts for a half of Korea’s petrochemicals. Led by Lotte Chemical, Yeosu produces a large quantity of ethylene, which amounted to 4,360 KTA as of 2019, the largest among Ulsan, Yeosu and Daesan. In 2018, 4,140 KTA of ethylene was produced in Yeosu, accounting for 46 percent of Korea’s total ethylene production. Moreover, Yeosu’s crude oil refining capability is 790,000 B/day, accounting for 25 percent of the domestic oil refining capacity. Its fertilizer production capacity is about 1.32 million tons per year, accounting for 32 percent of total domestic production.

This superior production capacity is attributable to outstanding infrastructure. The industrial water of Yeosu National Industrial Complex is about 540,000 tons per day, enough to cover the actual daily usage of 400,000 tons per day. In addition, electricity supply is 835,000 kW, way over the electricity demand of 580,000 kW. There are also 14 ports available for 36 berthing simultaneously, allowing for berthing capacity of up to 2,000-300,000 tons. In 2013, an access road to the National Industrial Complex was constructed as part of SOC expansion, resulting in an improved business environment.

Yeosu is not only connected to Korea’s capital area in three hours by highway, but also connected to the world through its outstanding infrastructure. Yeosu Gwangyang Ports recorded a total cargo volume of 303 million tons as of 2018 thanks to its infrastructure including an efficient straight-type port, wide opening yard (600 meters in width), and 100% On-Deck container port system. Also, proving its reputation as Korea’s largest export and import port, it handled 270 million tons of imports and exports. Breaking it down by continent, Asia topped the list (83.1%), followed by the Americas (6.2%).

You can check the table by moving it from side to side.
(Touch to close the information window and use it.)

The Yeosu Gwangyang Port Authority recently signed an agreement to develop “Gwangyang Port 3rd-Phase Dredged Spoil Disposal Area.” This project was initiated by petrochemical companies in Yeosu, requesting the provision of a site to invest in future new industries. The purpose is to turn the existing dredged spoil disposal area into a convergence logistical center capable of creating new added- value. It will be created in the vicinity of Yeosu Industrial Complex and will be implemented speedily, having been selected as the core project of the government.

The total project budget of KRW 456.2 billion will be put in to create 3.18 million sq. meters of land over the next ten years from 2019 to 2029. Future new materials (chemicals, oil refinery, metal industries, etc.), complex high-tech industries (electronics, medical, precision machinery, etc.), and complex logistical manufacturing (warehouse and transport industries) will be located there. A number of companies have already showed intention to move in. Construction is scheduled to commence in early 2021, followed by the provision of land and construction of factories in late 2022. In addition, the government-support infrastructure such as a gateway bridge, sewage treatment facilities, and sewage treatment plant will be provided to help companies run their businesses on a more stable basis.