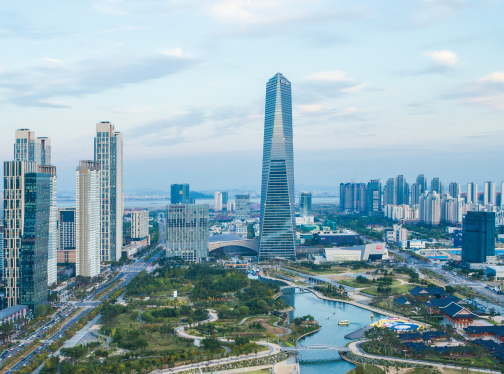 In Korea, there is a city ranked 1st in the world for biopharmaceutical production capacity.

It is Songdo International City. It is part of the Incheon Free Economic Zone (IFEZ)—located in Incheon Metropolitan City—which was given the status as free economic zone for the first time in Korea in 2003. Songdo was designed to foster high tech industries such as IT and bio engineering.

Exemplary companies in Songdo are pharmaceutical companies including Celltrion, Samsung Biologics, Dong-a Socio Group, and Binex. They are engaged in Contract Manufacturing Organization (CMO) of bio pharmaceuticals, or developing and producing biosimilars based on their proprietary technologies. The Janssen Pharmaceutical Company, a subsidiary of Johnson & Johnson, is also located in Songdo. In addition, there are numerous bio processing companies—Ajinomoto Genexine, Charles River Laboratories Korea, Merck, and GE Healthcare—and medical device companies such as Olympus and Osstem Implant. All in all, about 70 companies constitute a bio cluster.

Last year, Saint-Gobain of France, which records annual revenues of EUR 40.8 billion, signed an agreement to purchase a site for a factory. This move was initiated to supply single-use plastic components, required for a bio production process from Korea directly, rather than from overseas, as it used to be. By doing so, the procurement period of raw materials was cut down from four months to one month.

The R&D capabilities are also the best in the nation. Incheon Metropolitan City, to which Songdo belongs, records an average R&D spending of KRW 16.9 billion, 11 times more than the national average. Accordingly, Songdo shows the greatest achievements in Korea's bio pharmaceutical R&D. Of Korea's 10 approved biosimilar products, seven are owned by companies headquartered in Songdo. On average, a bio company in Songdo has 52 research personnel and 133 production personnel, topping the national list of human resources engaged in the bio industry. Also, it has well-established infrastructure for transportation of chilled and frozen logistics as it has both an airport and a port in its immediate vicinity. In particular, Incheon International Airport, which boasts the world's 3rd largest international cargo volume, is within a 20 minutes' distance. As biopharmaceuticals are made from animal cell cultures, it is critical to import and export products before products deteriorate during the storage and transportation process.

Korea's biopharmaceutical exports have increased 20 times as compared to 2010 when exports began in earnest, and Songdo has been playing a driving role. In 2017, exports of the bio industry in Incheon amounted to KRW 1.1903 trillion, accounting for 57.7 percent of total exports.

Celltrion, which succeeded in developing the 2nd generation biosimilar for the first time in the world, recently announced its plan to invest KRW 25 trillion in the biopharmaceutical industry in Songdo, and add a third production site with a 200,000 liter capacity. Meanwhile, Incheon City and Incheon FEZ secured 990,000 sq. meters of a site to create an additional bio cluster. It is expected that the bio cluster in Songdo is likely to double in scale in the coming decade, growing into a global bio valley.