The answer is Changwon, Korea’s first and the world’s fourth planned city.

Changwon, once a tranquil farm village, was turned into a planned city on the back of the government’s push to develop the heavy and chemical industries, starting with the construction of Changwon Machinery Industrial Complex (currently Changwon National Industrial Complex) in 1973.

Since starting operation of factories in 1975 with a mere KRW 1.5 billion in production, USD 600,000 in exports, 44 companies and 1,151 employees, Changwon National Industrial Complex has grown so much that its production is at KRW 50.301 trillion, exports at USD 15.637 billion, has 2,787 companies, and employs 124,228 people. 1,662 companies can be categorized into the machinery industry, accounting for 65 percent of total companies, with production worth KRW 1.465 trillion and reaching USD 9.15 billion in exports. Those working in the machinery industry accounts for 60 percent (74,932 persons) of total workers.

The population of Changwon reached 300,000 as planned in 1989 when the city development plan was carved out, and surpassed the 500,000 mark in 2007. In 2010, it was integrated with small neighboring cities—Masan and Jinhae—to become an ‘Integrated Changwon City’. As a result, it developed into a mega city with a population of 1.1 million, boasting a scale equivalent to that of a metropolitan city.

Changwon has been working to expand R&D as a way to sophisticate the previously production-focused industrial structure. It succeeded in attracting LG Electronics’ large-scale R&D Center (KRW 150 billion) in 2017 and Hyundai Wia Machine Tool Research Center in 2018. Also, in order to transform into an advanced industrial city, it plans to make concentrated investments until 2026 in advanced industries such as robotics, ICT machinery convergence, and defense and aerospace parts, which also can be connected with existing industries. In February this year, Changwon National Industrial Complex was designated as the first smart-leading industrial complex run by the government, with a KRW 1.2 trillion investment planned by 2022. If this project is completed in 2023 with 800 smart factories, productivity will increase by 30 percent, defect rate will decrease by 43.5 percent, and costs will be cut by 15.9 percent, upgrading Changwon as the center of production innovation.

The reason why Changwon was selected as Korea’s base camp for the machinery industry in 1973 was its attractive geographical conditions.

Changwon, located in the southeastern part of Gyeongnam, is a basin surrounded by 500 to 800 meters of mountains with 5,000 hectares flatland inside, providing a wide site to build factories. Also, its ground is solid enough to sustain the heavy weight associated with the machinery industry.

Also, Changwon lies in the center of a major industrial belt consisting of Pohang, Ulsan, Busan and Gwangyang along the southeastern coast, while a railway intersection of the Gyeongjeon Line and Jinhae Line, Namhae Expressway, and Jungbunaeryuk Expressway passes through the city center, providing close access to neighboring cities. Thanks to Kimhae International Airport, located within 40 minutes-distance, and three KTX stations (Masan, Changwon, and Changwon Center), it is possible to access Seoul in an hour by flight and 2 hours and 50 minutes by train. Also, befitting its reputation as a port city, it has Masan Port, Jinhae Port and Busan New Port, making freight transportation easier.

Changwon’s economically active population is 550,500 in total, the second highest in the country. 45 percent of the population is in their 20s to 40s, supplying young and abundant labor power. Also, Changwon accounts for 37 percent of the patent applications filed in Gyeongnam. It has ample R&D resources as it is home to Korea Electro Technology Research Institute, Korea Institute of Materials Science, Changwon Smart Innovation Support Center, Agency for Defense Development, LG Electronics R&D Center, and Hyundai Wia Machine Tool Research Center. 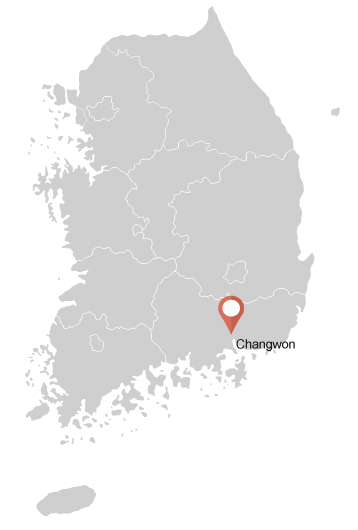