Korea’s parts and materials industry is one of the core components of the country’s economy, as it boasts a high level of global competitiveness. Here are two regions in the country that are seeing rapid growth and increasing investments for R&D and manufacturing.

At the center of Gwangju City’s efforts to become a powerhouse of eco-friendly vehicles lies the Gwangju Automobile Industrial Valley. The Valley is composed of the Bitgreen National Industrial Complex, the Jingok Industrial Complex and the High-tech District in Bukgu. Currently, a total of 42 companies like Hyundai Mobis are doing business in three auto parts clusters in the Jingok Industrial Complex. Each cluster is in charge of the modularization of auto parts and the production of auto parts for clean diesel vehicles as well as electric vehicles. R&D institutes are concentrated in the Chumdan District, including the Gwangju Institute of Science and Technology (GIST), Gwangju Technopark and the Gwangju regional branch of the Korea Electronics Technology Institute (KETI).

The Bitgreen National Industrial Complex will serve as a focal point of the Valley. The new complex will be as wide as 4.13 million square meters and will border both Gwangsan-gu, Gwangju and Hampyeong-gun, Jeollnam-do. The Korea Land & Housing Corporation was assigned as project manager and will cre- ate a complex exclusive to the automobile industry. The area will house the auto parts manufacturing cluster, the techno- logical support center and the global busi- ness center. In particular, the technologi- cal support center will be equipped with 179 different kinds of testing equipment and facilities to help companies develop leading-edge technologies.

Spanning over 2 million square meters, the Hampyeong area will accommodate a cluster specializing in the production of finished cars and EVs, as well as residential and recreational facilities for workers. Companies armed with advanced and environmental-friendly technologies will be located in the cluster, mainly related to sectors like automotive lightweighting, high-efficiency motor parts, solar-applied automotive electronics and specialpurpose vehicles. Gwangju City has been active in attracting foreign capital, officially requesting 27 global firms including Tesla, Mahindra and Hyundai Motor Group to make investments.

Another region that is spearheading Korea’s part and materials industry is Yeongcheon. The city opened Boeing’s Avionics MRO Center for the first time in Korea and also built the Aviation Electronic Test Evaluation Center to deal with the test, evaluation, certification and R&D of parts and components for avionics.

Yeongcheon City also signed MOUs with four companies: SL Corporation, Joeun Glass, SG Corporation and Kaon P&S. These companies will invest KRW 78 billion (USD 73.3 million) in the project to build the Gogyeong General Industrial Complex. The construction project has recently gained momentum and once completed, the complex will house companies specializing in auto and trailer parts, metalworking and metal processing, machinery and equipment. Located in Yongjeon-ri, Gogyeong-myeon, the new complex will border major industrial cities such as Daegu, Pohang, Gyeongsan and Gyeongju. This can be translated into enormous demand from upstream industries and immense potential to be a logistics hub. Officials said that a growing number of companies are showing interest in the complex, and about 78.13 percent of industrial sites have been purchased. Once completed, it is expected to attract KRW 700 billion of investment and create KRW 3.5 trillion in economic benefits to local community.

Furthermore, two out of eight industrial complexes in the city fall under the Daegu- Gyeongbuk Free Economic Zone (DGFEZ). These complexes include Yeongcheon Industry District and Yeongcheon High-tech Park. The Yeongcheon Industry District now houses 69 companies, and seven of them are foreign-invested businesses. Yeongcheon also received the highest ‘S’ rating at the foreign investors’ satisfaction survey by the KCCI (Korea Chamber of Commerce & Industry). The Yeongcheon High-tech Park is now under construction and will be completed by 2023. About KRW 222 billion (USD 208 million) will be poured into creating the cluster specializing in parts and components for avionics and smart vehicles. 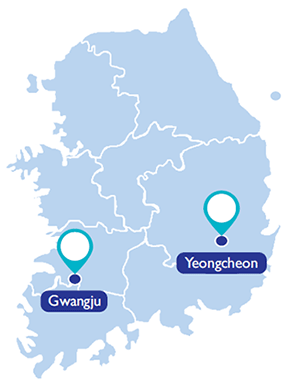