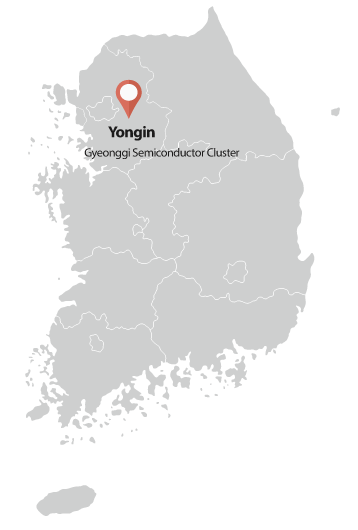 According to an announcement released on May 15, Gyeonggi Province has begun preparations for a long-term support plan for the semiconductor industry by organizing a task force and establishing a mutually beneficial plan for cooperation based on the expectation that the semiconductor industry will have a considerable influence on the future of Korea’s economic stability.

Additionally, the Gyeonggi Yongin Platform City that Gyeonggi Province and Yongin City agreed to jointly develop is expected to accelerate the creation of the Gyeonggi Semiconductor Cluster. The Gyeonggi Yongin Platform City will be a self-sufficient urban area equipped with state-of-the-art industrial, commercial, residential, cultural, and welfare facilities on a 2.7-square-kilometer site extending through Bojeong-dong, Mabuk-dong, and Singal-dong in Giheung-gu, Yongin City. The area already has robust industrial infrastructure accommodating the headquarters of major pharmaceutical companies such as Green Cross and Il Yang Pharmaceutical, as well as their manufacturing and R&D facilities, and the nearby Mabuk R&D Complex where nine companies, including Hyundai Mobis, and the Hyundai Technology Research Center are located. In this respect, Gyeonggi Province expects synergies to be realized through the Gyeonggi Yongin Platform City and the Yongin Semiconductor Cluster, where SK hynix recently decided to locate its plant.

Gyeonggi Province will support the successful creation of the Gyeonggi Semiconductor Cluster by all available means and also establish additional support measures.

On April 17, Gyeonggi Province held a Gyeonggi Joint Support Group meeting, led by the Vice Governor for Administration 2 and the Vice Governor of Peace, in which 11 departments participated. At this meeting, the province decided to operate a one-stop intensive support system in order to accelerate the authorization of the use of agricultural lands and mountain areas for the expansion of infrastructure, such as electrical lines, waterworks, and roads. In addition, a semiconductor industry task force was organized within the Industrial Policy Division that will support authorization work. Gyeonggi Province is also considering plans to transform the task force into a standing organization through the administrative reorganization scheduled in July and province-wide promotion of the creation of the semiconductor cluster, because it is expected that the cluster will have significantly positive effects on job creation and the revitalization of the local economy.

Gyeonggi Province and SK hynix are discussing ways in which to cooperate so as to ensure the successful development of the Yongin Semiconductor Cluster. The province plans to both establish the Mutual Growth Cooperation Center, equipped with entrepreneurial research spaces and education facilities for both large companies and SMEs in the Yongin Semiconductor Cluster, and to create a mutual growth fund to support companies that have innovative technologies related to semiconductor equipment, materials, and parts.

Park Shin-whoan, Gyeonggi Province Assistant Governor for Economy and Labor, stated: “The semiconductor industry has had a significant impact on the creation of high-quality jobs, economic growth, and in bolstering the competitiveness of domestic companies. In this sense, it is very important to successfully create the Gyeonggi Semiconductor Cluster. Gyeonggi Province, in order to prevent its support from being focused on just a few companies, is seeking a multifaceted approach to create an industrial cluster for shared growth, where large companies and SMEs can flourish together.”